I was too young to be taken to the movies when Nagin (1954) came out. I bought the song booklet with my pocket money, memorized all the songs and sang along whenever the songs were played, during festivals, marriages, in the paan shops of Moti Bazar in Malerkotla.

I saw it in 1967-68 in Chandigarh at a Matinee show. Of course, I enjoyed it thoroughly. One scene stuck in memory and puzzled me. I S Johar was a theater owner. He had thick eyebrows, fake mustache, fake glasses, walked in a funny sort of bent way with hands on hips and talked very fast.

The mystery was solved a few years later when I saw my first Marx Brothers film, Duck Soup, in Pittsburgh.

I S Johar was doing an impression of Groucho Marx! 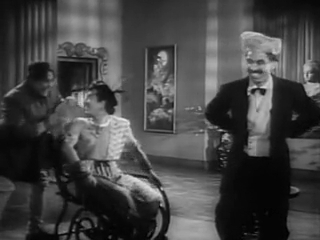