Long ago, in the nineteen seventies, I saw a book called "PHYSICS FOR POETS". The book was written by Professor Robert March of the University of Wisconsin, a physicist who apparently did not know much about poetry. Here I am honored and delighted to present a biographical sketch of Professor Raj Pathria who is not only a well-known physicist but also a published Urdu poet!

Raj Kumar Pathria is a theoretical physicist, and an Urdu poet, born in a middle class Punjabi family to parents Ramji Das Pathria and Mela Devi Pathria. He is married to a former student of his --- miraculously named Raj Kumari!

Raj and Raj Pathria have two daughters --- Mini (a bone radiologist in San Diego) and Dimpy (a computer scientist in Chicago) --- and a son Anu
(a software engineer in San Diego).

Raj Pathria received his early education in a local high school in Ramdas --- named "Baba Buddha Khalsa High School" --- where he passed his matriculation examination in 1948, breaking all previous records held at that school.

He then joined the Hindu College, Amritsar, where he had the privilege of being not only a classmate but also a good friend of Manmohan Singh (who is currently the Prime Minister of India). For record’s sake, while Raj was a constant topper in the Science faculty of that college, Manmohan was so in the Arts faculty. And, luckily, between the two of them, there never ever was even a tinge of academic rivalry!

In fact, when in May 1951 the Hindu College invited some of its former students to receive a volley of academic awards, Raj had to travel from Hoshiarpur (where he was now studying Physics) to Amritsar by bus to receive the many awards due to him, while Manmohan (who was still living in Amritsar and was now studying Economics) simply walked into the place!

However, when the award ceremony was over, Raj had no idea as to where he would spend the impending night. That is when Manmohan came to his rescue, suggesting that he should stay at their place and go to Hoshiarpur the next day. This kind invitation on the part of Manmohan gave Raj the delightful opportunity of not only meeting but also enjoying the generous hospitality of the Kohli family.

Raj Pathria obtained his B.Sc. Honours and M.Sc. Honours degrees from Panjab University, Hoshiarpur in July 1953 and July 1954, respectively, and soon thereafter, at the invitation of Professor F.C. Auluck, joined the graduate school of Physics at the University of Delhi for his doctoral studies --- which he completed in March 1957. In February 1958, he joined the University of Delhi as a Lecturer in Physics and in April 1961 got promoted to Readership. In August 1964, he left Delhi to take up a ‘Visiting Professorship’ at McMaster University in Canada.

Even though his field of research at the University of Delhi was primarily ‘Statistical Mechanics’, Pathria, during that time, got fascinated with the subject of ‘Relativity’ and in 1963, with the friendly cooperation of the Hindustan Book Agency, produced a book entitled ‘THE THEORY OF RELATIVITY’. This maiden attempt at book-writing resulted in fabulous reviews from far and wide, especially from Professor W.H. McCrea –-- who himself was a celebrated author on this subject. In 1974, the Pergamon Press, Oxford produced a second edition of that book and in 2003 Dover Publications of New York took that book under their protective wings --- thus granting this forty-year-old venture an indisputable ‘certificate of immortality’!

In Canada, Pathria continued his research in the diverse field of ‘Statistical Mechanics’; at the same time, he gave graduate courses on that subject at McMaster University, Hamilton and the University of Alberta, Edmonton. In 1967, he returned to India to take up Professorship of Theoretical Physics at the Panjab University, Chandigarh where (apart from conducting research in a variety of subjects in Mathematical Physics) he continued his mission of disseminating among his students the knowledge of the fundamentals of Statistical Mechanics.

In 1969, Pathria returned to Canada and, in addition to his other academic pursuits, continued to teach a variety of courses at the University of Waterloo and the University of Windsor. In 1972 the Pergammon Press, Oxford published his classic text on "STATISTICAL MECHANICS" which became an instant success on the international scene!

In the early nineties, when his new publishers (Butterworth-Heinemann) persuaded Pathria to produce a second edition of this celebrated text, he sought the help of Surjit Singh, a former student of his from the Chandigarh days (who had also been a post-doctoral fellow with him at Waterloo during the years 1983-1987). The result of this effort was a brand new edition of this book that came out in July 1996 and, like its predecessor, continued to be a ‘best-seller’!

The history repeated itself in the year 2009 when Pathria’s newest publishers (Elsevier/Academic) prevailed upon him to produce a third edition of this book. He now sought the help of Paul Beale, of the University of Colorado at Boulder, whose co-authorship produced another brand new edition of this book in March 2011!

In between the last two events, Pathria retired from the University of Waterloo in August 1998 and, soon thereafter, moved to the west coast of the USA and became an ‘Adjunct Professor of Physics’ at the University of California at San Diego --- a position he continues to hold till today.

Raj Pathria has published about 120 research papers in a variety of international journals of repute.  These papers are mainly spread over the following topics.

(i) Superfluidity in liquid helium II --- one of the topics of Pathria’s Ph.D. thesis, pursued in collaboration with S.M. Bhagat.

(ii) Lorentz transformation of thermodynamic quantities --- a major topic of Pathria’s Ph.D. thesis, pursued on his own.

(iii) Polymers and the Theory of Numbers --- a fascinating subject pursued in collaboration with V.S. Nanda.

(vii) A study of ‘stochastic phenomena in sociology’ --- pursued in collaboration with Karmeshu and C.L. Sharma.

(i) Fellowship of the American Physical Society, 1976

(ii) Recipient of the "Distinguished Teacher award", University of Waterloo, 1977 ---  the citation for this award was presented at the UW convocation held on May 27, 1977 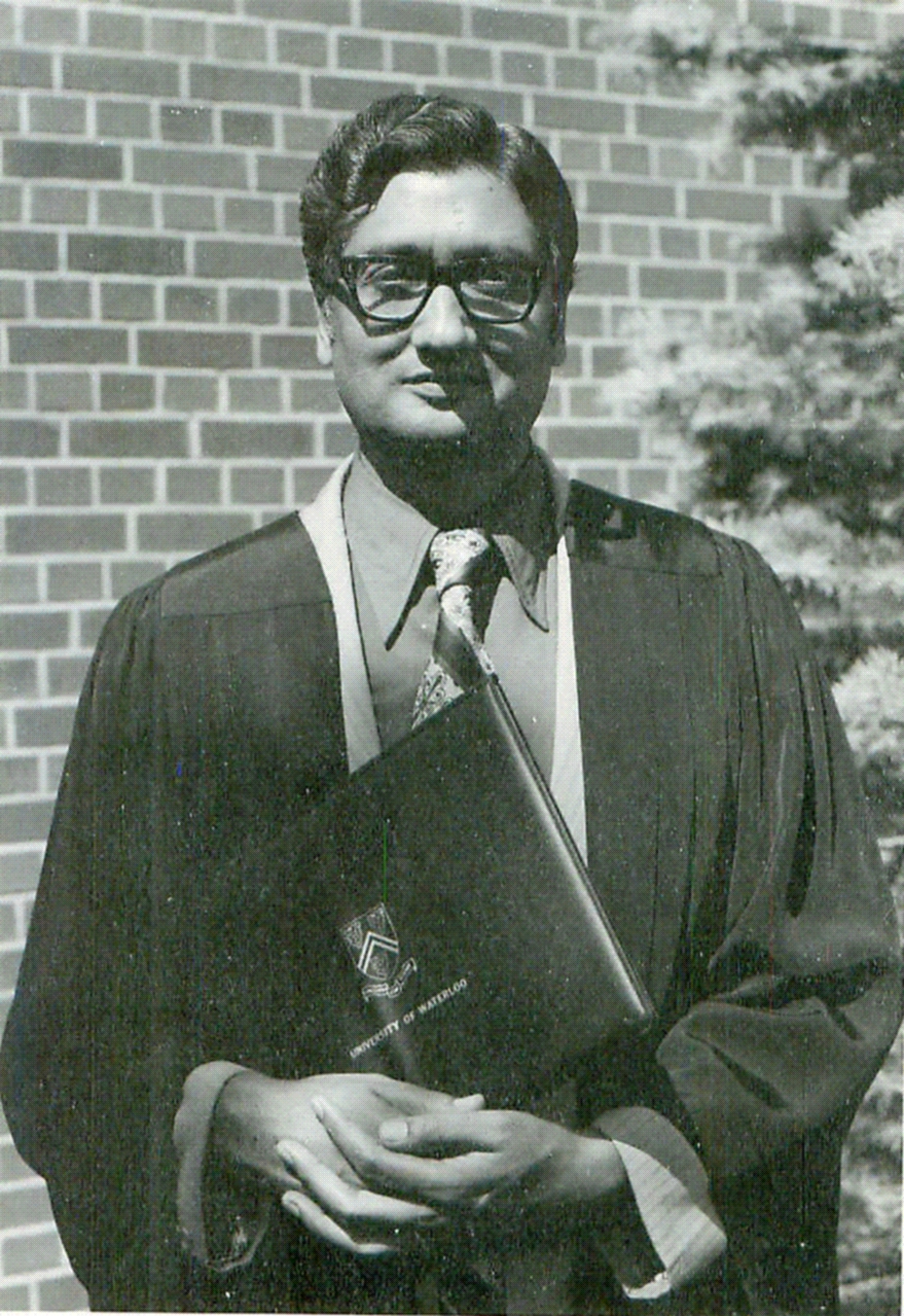 (iii) Distinguished Professor Emeritus, University of Waterloo, 1999 --- this honor was bestowed upon Professor Pathria at the UW convocation held on June 18, 1999

Apart from Mathematical Physics, Pathria has hardly any other hobby --- except for CONTEMPORARY AFFAIRS and URDU POETRY!

Right from his childhood, Pathria was nurtured in an atmosphere replete with Urdu language, Urdu idiom and Urdu poetry and, as luck would have it, he is still immersed in that mesmerizing marsh!

Having read, and imbibed, dozens of classics emanating from stalwarts like Miir, Ghaalib, Zauq, Momin, Haali, DaaGh and Iqbaal, down to modernists like AsGhar, Faani, Hasrat, Jigar, Firaaq and Faiz, Pathria finally turned to writing Urdu poetry himself ---- but only around the year1993 when he was close to retirement from Physics. The result so far has been phenomenal!

Pathria --- now pen-named ‘Qais’ (after the legendary lover of the Persian damsel Laila) --- somehow ‘steals’ almost any poetic symposium he happens to attend! Among literary circles, he is now known for his latest compilation of Urdu Ghazals entitled "Saihraa Saihraa", which was published by M.R. Publications of Daryaganj, New Delhi, towards the end of the year 2005. His post-2005 compositions might warrant another book entitled --- who knows what!

Back to Surjit Singh's Home Page