Note: The following was published on sadarang.com, now defunct.

I have tried to resurrect it from the Internet Archives. 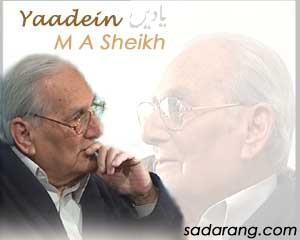 Yaadein: The Kashmiri Mehfil by M A Sheikh

A nonagenarian, aesthete and scholar of high repute, M.A.Sheikh has been associated with the musical circles of Lahore for almost 70 years and has seen profound changes taking place to classical music. Yadein or Memories is a reflection of M.A. Sheikh's memorable moments in classical music. The opening article in this series concerns a tour to Srinagar in 1935 by seasoned artistes Ustad Chotay Ghulam Ali Khan and Ustad Jamal Khan.

Ustad Chotay Ghulam Ali Khan belonged to the Qawwal Bachha gharana and had achieved fame in the subcontinent for his khayal performances, his extraordinary ability to execute difficult taans won him praise from listeners. Ustad Jamal Khan, a member of the Gwalior gharana was another musical giant and an uncle of the famous vocalist Ustad Umeed Ali Khan.

We all left from Lahore and reached Srinagar in two days. The entire group was accommodated in two house boats stationed at Dal Lake, Srinagar, one of which was occupied by the two vocalists and instrumentalist.  Kashmir resembled paradise on earth, the lush green lawns of the surroundings dotted with tall pine trees and the leaves emitting flavoured aroma was both exciting and refreshing. In this pleasant and informal atmosphere, Ustad Chotay Ghulam Ali Khan and Ustad Jamal Khan with Manzoor Hussain accompanying on the tabla would daily sit face to face each morning and later in the evening surrounded by us and sing for two hours. Their exciting renditions would thrill us all and attract the tourists staying in neighboring house boats who would often gather near our house boat when the lingering melodies and thundering musical phraseology reached their ears.

During each performance, both vocalists focused on difficult taan patterns and would try to outdo each other, each recital resembled a battle between two gladiators fighting to win at all odds. The style of both stalwarts was open throated, each taan was perfectly executed, there wasn’t much exhibition of tihaees although layakari of both was clearly evident to all. They often sang raags Bhairon, Lalit, Todi, Alhaiya Bilawal, Jaijaiwanti, Multani, Marwa, and Puriya.

The performances continued for about a fortnight and the matter came to a head when an emissary of the Maharaja of Kashmir dropped in with a message asking the group along with singers to present themselves at the state guest house on the given date. Khawaja Khurshid Anwar politely refused this proposal by explaining that the group was going to Gulmerg according to a pre-planned schedule, and that they would comply with the request on return. We soon set off for Gulmerg, a summer resort favored by the officers of the British Raj, and were astonished to see the tourists we had met in Srinagar had reached Gulmerg before us in anticipation to hear more music. We stayed at Gulmerg for about a fortnight before returning to Srinagar and immediately romped off home to avoid a call from the state Durbar.

Memories of this trip lingered on for a number of years and each time the recollections provided immense pleasure and extra joy. One important result of this trip was the discovery of Ustad Jamal Khan as a vocalist of great merit. From then on he became a regular visitor to Syed Shabbir Hussain Shah's baithak which was frequented by great artistes such as Ustad Ashiq Ali Khan, Ustad Akhtar Hussain Khan, Baba Buday Khan Qasuri, Feroz Nizami, Ustad Tawakkal Hussain Khan and Ustad Sohni Khan.