Platinum Jubilee of the Hindi Talkie 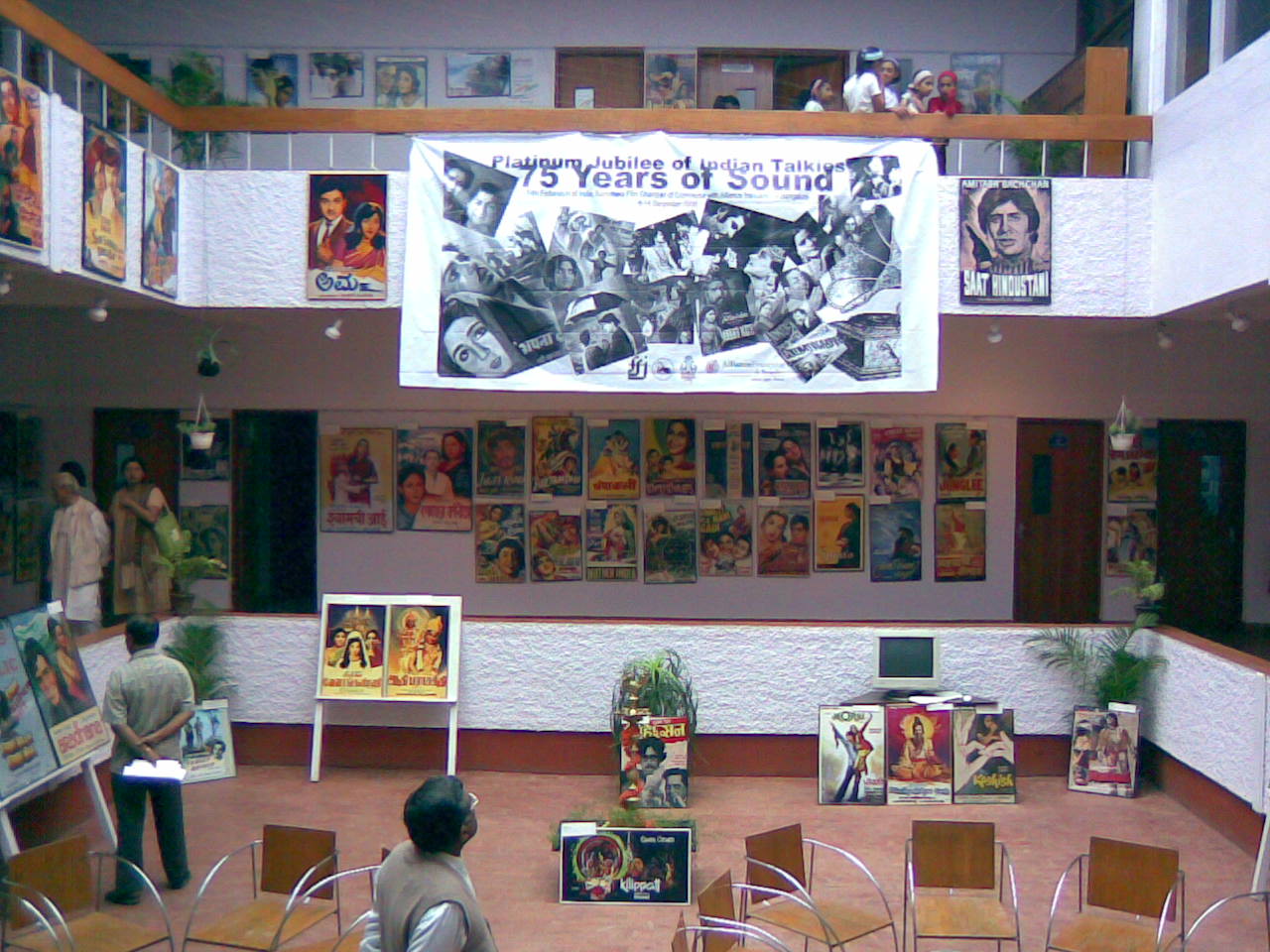 The Karnataka Film Chamber of Commerce and Alliance Francaise de Bangalore hailed the completion of 75 years of sound in Indian films by holding this celebration from Dec.8 to Dec.14 2006. A number of other bodies were involved, including the National Film Archives, National Film Development Corporation, Karnataka Department of Culture, Max Mueller Bhavan and so on. But there was a lingering sadness, quietness, wistfulness to the entire proceedings. This is perhaps befitting, given that the cumulative sound of 75 years can be drowned out in a single pub’s blast of remix even if that remix is of “sai.nyaa.N dil me.n aanaa re”!

The last-mentioned song as well as “pa.nchhii banuu.N u.Datii phiruu.N” and “chhun chhun chhun baaje paayal morii” were featured in the opening ceremony held at the Lavanya theater. A bevy of costumed girls danced to the original audio. The choreography was quite pleasant and appropriate. The lead dancer in the Shamshad Begum number had an uncanny resemblance of looks as well as dancing style with the dancer of yesteryears Cuckoo! This was followed by the speeches and felicitations. Among the honorees was Meena Kapoor who had traveled all the way from Delhi for the occasion. It was a pleasure talking to Meena-ji. She is a sweet and unassuming lady, given to easy smiles and even laughter whenever somebody talks about her wonderful talent.

The last attraction of the evening was the screening of Sargam (1950). I had planned to leave after a few minutes, but for someone who had never seen a film from that era on the big screen, the full theatre sound of Lata’s pristine voice and sublime singing was an overwhelming sensation. “tinaka tin taanii” fell like a golden sledgehammer upon my eardrums and I was spellbound for the rest of the evening. I could not bear to leave until the very end. I savored each note of Lata’s voice and C.Ramchandra’s music. 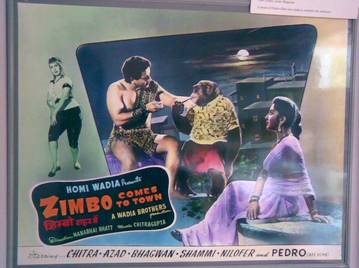 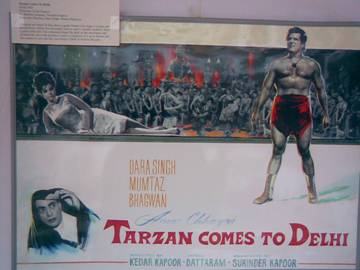 The film archives had carried an exhibition of film posters ranging from the very early to the newest to the International Film Festival in Goa earlier this month. They agreed to carry a portion of the exhibition to Bangalore. The exhibits included posters from films, mostly Hindi, but a few from Gujarati, Marathi, Malayalam, etc. films as well. Looking at those posters was like peeking back through time. Posters that caught my eye included Jigar Ane Ami (Gujarati, starring Sanjeev Kumar), Mohityanchi Manjula (Marathi, with music by Anandghan), Zimbo Comes To Town, Tarzan Comes To Delhi (what names!) etc.

The occasion was graced by a number of people who are passionate about old films and their music. They possess encyclopedic knowledge about this topic. The talks series featured these people talking about the topic dearest to their hearts. The first one was an audio-based presentation titled Sargam Ka Safar by Shri Nalin Shah. Starting out with some of the earliest film songs, he traced the history of this genre through stylistic and technological changes, highlighting the music directors and singers who helped shape this form of music. It was truly a walk down melody lane. And this was perhaps the only item that truly featured close to 75 years of music since Nalin-ji used a few recent songs to close his talk, while making no bones about his dislike of them!

Following Sargam Ka Safar, I read my paper (rather gave a presentation, starting off with a recording of Zubeida-ji singing a snatch of “badalaa dilawaayegaa yaa rab” from Alam Ara) titled  Archiving Indian Film Music. I am glad that the presentation triggered off a flurry of questions and an extended commentary from Shri V.A.K.Ranga Rao, who agreed with some of the points I was trying to make, but also brought out a slightly different perspective. Immediately following this Shri Shailendra Diwan – another rmimer – read Dr. Surjit Singh’s paper titled Sound and Music in Hindi Talkies: The First Four Years.  This was acknowledged as a highly informative paper by one and all.

I actually missed all the other talks since they happened during the day time on weekdays. Hamraaz-ji from Kanpur presented his article on Compiling Data of Indian Films. Shri V.A.K.Ranga Rao from Chennai gave a talk that centered around his favorite composer C.Ramchandra. Shri S.Kinikar from Pune talked about the contributions of Naushad (incidentally, he has also written Naushad’s “autobiography” in Marathi). Shri Vijay Naphade from Belgaum/Mumbai spoke about three unsung music directors. Shri Sapre from Pune talked about Anil Biswas’ contributions to music. These people have spent their lifetimes collecting, learning about, writing about and furthering the cause of saving and honoring this music. Hats off to them.

The sound recording of Alam Ara was done by Shri Sarvottam Badami from Bangalore. During the course of this celebration, we heard the story of how he lugged his recording equipment all the way to Bombay for the first talkie. Badami-ji passed away about a year back and it remains a regret that he could not witness this platinum jubilee of what he had helped start. It was only appropriate that the celebration was held in his city and was partly hosted by Badami house, named after him.

Yet another interesting historical anchor point was the venue of the closing ceremony. It was at the Elgin Talkies. It was built in 1896 and has screened the first films shown by the Lumiere brothers, has screened a number of silent era films and of course Alam Ara. Today, it shows re-runs of B-grade type movies since it has fallen out of favor with the multiplex-era cinegoers. But it has to be one of the oldest active theatres in the whole world! Standing in such a place, one realizes that this is the beginning of time as far as films are concerned. 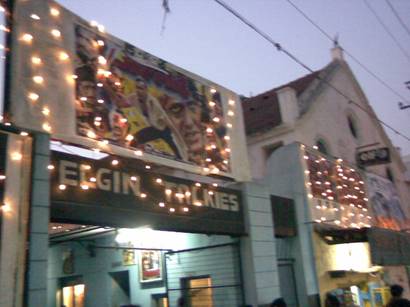 The theatre itself is not in very good shape, but I am glad that it is there. I was chatting with Hamraaz-ji and others before the ceremony began, when Shri Bhaktavatsala (erstwhile chairman of KFCC) introduced us to the theatre owner. He was carrying an innocuous-looking notebook. We all must have given a collective gasp when we realized that this was a part of their logs going back all the way to 1922! The movie names and other relevant information along with starting and ending dates were neatly recorded. The log book showed that Alam Ara was shown here 3 months after its release and that it was re-released a year later. This was a piece of history we were handling! 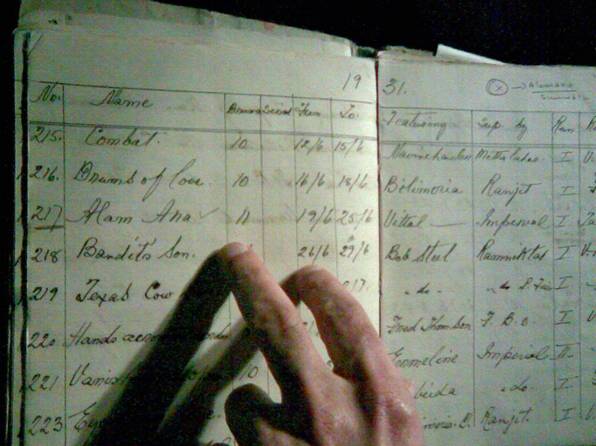 The closing ceremony was conducted in a unique fashion by honoring projectionists who had been working for 30 years or more – one of them had done this for 42 years! As was mentioned, these people who bring us our dearest form of entertainment remain invisible. The finale was the screening of Laila Majnu (1945).