First time for Shahu Modak and Shanta Apte. Interesting info in this ad from the Indian Express, Madras Edition, Jan 6, 1933. People ask why HFGK does not have release dates? Two main reasons, there is no universal documentation for release dates, and, it changes from city to city. We can see from here that it played at the Kinema Central, Madras from Jan 7, 1933. We also see that it had been running in Bombay for 21 weeks before that. In fact, I have read that it ran for 25 weeks in Bombay. 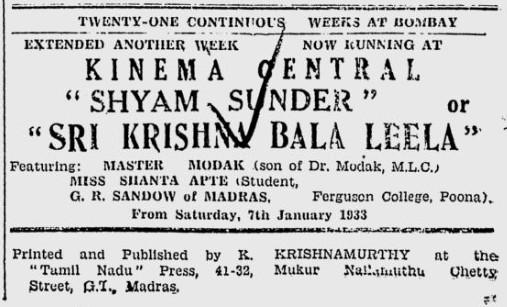