After the recent Musing about him, Pramathanath Sastry expressed puzzlement about how a Gujarati came to be in Lahore. I started to rummage through my collection of books, magazines, newspapers and cuttings. Finally remembered reading about him in the book 'Punjab Kee Filmee Taareekh' by Parvez Rahi published in Lahore.

Here is the relevant Urdu text with my translation.

Gul-e-Bakavali was a clean and a successful Punjabi film. Its dialogues were very interesting. This film was produced at the cost of 60,000 rupees and it made 15 lakhs of rupees. The music director of this film, Ghulam Haider was paid 250 rupees a month.  This film was released in Prabhat Cinema Lahore on November 12, 1937.
Seth Dalsukh Pancholi's story of coming into film production goes something like this. He was a distributor of films, owner of Empire Distributors in Lahore.  One day producer-director R L Shorey invited him to come to his studio.  So Pancholi went to the studio in Muslim Town, where director R L Shorey was busy shooting his film 'Shahar Khamoshan'. On the set were Shyaman and Majanoon. Film director R L Shorey introduced the actors to Pancholi.
A few days after this incident, producer R L Shorey went to Pancholi and asked him to finance his film 'Sohni Mahiwal'. Pancholi agreed to do this but put many conditions before he could finance it. After the release of this film Pancholi made a huge profit.  Because of this Pancholi gave away all of his distribution business to his elder brother and he himself started to produce films. 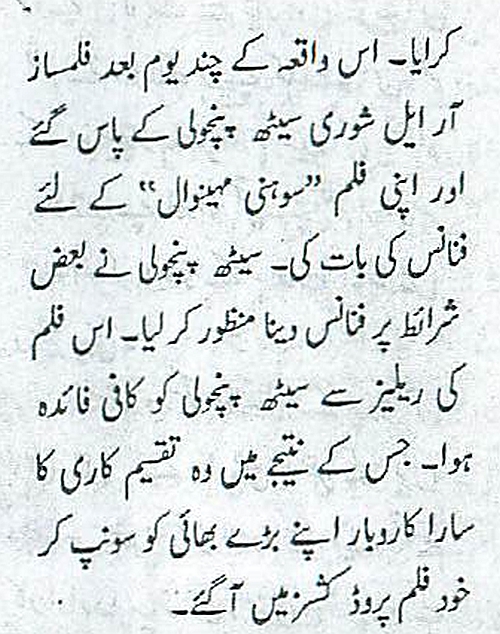