In the previous Musing, I showed a photo saying that Shankar-Jaikishan are the music directors of the Indo-British Production 'Tarzan Goes To India (English)'. I also showed screen caps from the actual DVD of the film that showed the music director to be Ken Jones with no mention of SJ.
I knew that if I make a 'bad' statement about SJ, their cult followers will come after me with pitchforks and axes, so instead of saying that 'SJ had nothing to do with the music of this film', I was careful to say that SJ were hired but they are not listed, I have no idea what happened.
Then Sandeep Apte posted a page from a Hindi film 'Tarzan Mera Sathi (Hindi)' that showed both Ken Jones and SJ as music directors. Later, I found that the Hindi Film Geet Kosh has listed the film in Volume 5.
So, SJ definitely gave music (jointly with Ken Jones) to the Hindi film, it remains unclear what they did for the English film.
Unfortunately, a video of the film is not available to me and the two songs were not issued on records, so the songs are only in the video. It would be nice to hear the songs or/and see the film. 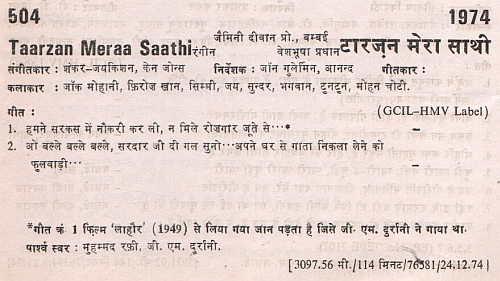