About 4 years ago, I posted this song on Facebook and requested people to identify the location and some buildings in Bombay of 1958.

One building was the Kasturi Building, photo by Vibhendu Tewari. 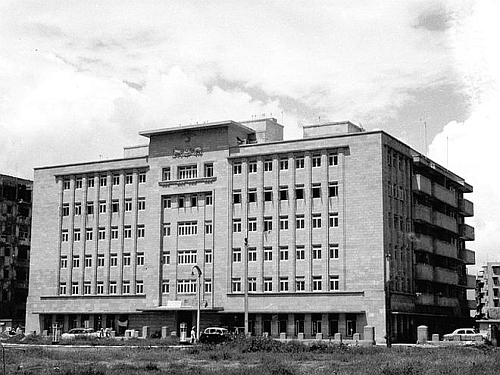 The video is here

The Video of the Song

Here is the discussion:

While not actually filmed the moving images in the background starting from 3:34 onwards are at Wilson College, Sodha Nursing Home, Babulnath Bandstand, Walkeshwar Road etc. I know cause my Dad grew up there and our family home (uncles, aunts etc) all lived there till 2014.

The scenes starting around 1:28 till about 2:26 appear to be live on street shooting based on crowds chasing or standing around on corners. Also the scene starting approx 1:38, just before they get off and let the car go round and round without anyone visibly in the car appears to be at Kala Ghoda. The opening shot also appears to be live shooting at Flora Fountain (not very certain. That circle does not have that signature statue at flora fountain. So it might be some other spot near Churchgate area). The scenes starting at 0:43 seem to be using a background screen. When they switch back to using background screen shots around 2:26, that appears to be Marine Drive till 2:47, where it briefly switches to live shooting on some street near Kala Ghoda and immediately switches to using screen in background using Marine Drive scenes. Starting 3:01 where the car appears to be going uphill in reverse is most likely Malabar hills. Of course, all this is based on my memories of Bombay from 1967 till 1981. Ketan has already filled in on rest of the clip and his account seems to match my memory as well.