In the late 90s, Ketan Dholakia, aveteran RMIMer, actually a founder-member of the classic RMIM USENET group (since Jan 1992), met Dev Anand. This is his account of the meeting.

I met him for an interview in the late 1990s. I had to call him a dozen times before his assistant handed him the phone. Then he talked to me on the phone for about 30 minutes and asked if I wanted to meet him for a role in his forthcoming movie. It was hard for me to stop myself from blurting out "Not if you offered me a million dollars" but somehow I managed to hold my tongue. I told him I just wanted to meet him to talk about his work. He invited me to his Anand dubbing studios office. His office wall was lined with books on multiple topics. Even on his desk and coffee table books were strewn about. As Pavan states, he wanted to talk about his new and upcoming movies and I wanted to talk about his past. Reluctantly he opened up about his association with Guru Dutt, Balraj Sahani, Raj Khosla, and ofcourse the Burmans. The one time he showed some emotion was when he said "I miss them all. It was easy making a movie when you had a team like that. Today--I make do with what I have, but you can't replace a Guru Dutt, or an SD Burman or a Sahir. We used to be a team, worked on everything together, from scripts, to direction, costumes, music, etc. These days it's all done piece meal and I miss that camaraderie and creativity that comes from working together".  And then he looked down and fell silent. But after a minute he bounced back to talk about his upcoming movie ( I forget whether it was Censor or Love in Times Square). He did share some tidbits about how they made their movies. He said Navketan always wanted to make a movie on contemporary subjects, hence HRHK on the hippy movement, Des Pardes on the migration to the West, Swami Dada on his own brother's fascination with Rajneesh etc.

As to how he got his money to finance his movies--he had a steady stream of revenue coming in from his dubbing studios and his licensing and distribution of his movies to Doordarshan, Shemaroo and others. Remember he owns the rights so he gets paid everytime his movies are played. Plus he had bought property in the 1950s and 1960s, which even in the 1990s was worth crores of rupees. All he had to do was sell of some parcel of land to a developer and his next movie was financed. Just this year, Suneil Anand sold a flat in the high rise that replaced Anand Studios at 1.02 lakh per square foot, approx 28.5 crores for the 2786 square foot flat.

His actresses--he never had any problems getting a Hema or a Mumtaz or a Rakhee to work with him. Hema/Zeenat were asked in an interview shortly before he died, if they would work with him again and they both said "yes" before the question was even over. God knows why they would agree to act in a movie directed by him but there is no accounting for tastes.

As to his movies--don't underestimate his input. Sure he had Guru/Vijay/Raj and others but this man was no fool. He had a keen sense of script and what would appeal to the movie going public. Unlike Raj Kapoor who catered to the masses, DA could cater to the urban and small town crowd at the same time.  Of course he had the strength of music to back him up too.  His problem was different. If you examine a lot of his movies, his characters in the 1950s and even 1960s are shades of grey whether it is Jaal, Baazi, Kala Bazaar, Kala Pani, Guide, Jewel Thief etc. . As a friend put it ..his movies were successful when he was Lord Krishna, somewhat mischievous, indulging in shady dealings etc . Starting with HRHK, he began to see himself as Lord Ram, the saviour--and that's when he and his movies went downhill. For him once the script was written the movie was directed, even if the script was half-baked and the direction and editing were shoddy/sloppy. I don't even know if he went back and saw the movie in its entirety once it was completed. He would just move on to the next one.As a result even a movie like Censor which has a thought provoking story which questions--who has the right to decide, what you or I can see and hear? The government or we ourselves?--gets lost in the madness of his (lack of) direction and editing. That subject is so timely even today but oh well.. That in a nutshell was DA. I am just happy I got to meet him and remember his compliment "You really have researched my movies". I wanted to tell him that I had 2 weeks to do nothing after a leg surgery, where I was confined to the house back in New Jersey (which some of you visited for the second RMIM meet) and hence I raided the local video store and watched some 20 plus DA movies in a week. Never mind that Iin my head, I have the story and scenes from Amardeep mixed up with Sarhad or RKRCKR, or Manzil etc. Even my mind is better than his editing. :) 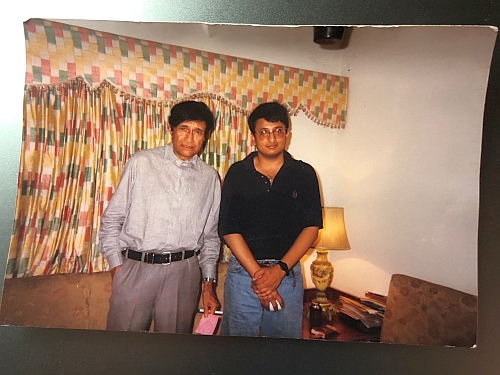