He immediately thought of putting all the HFGK data into the computer somehow. 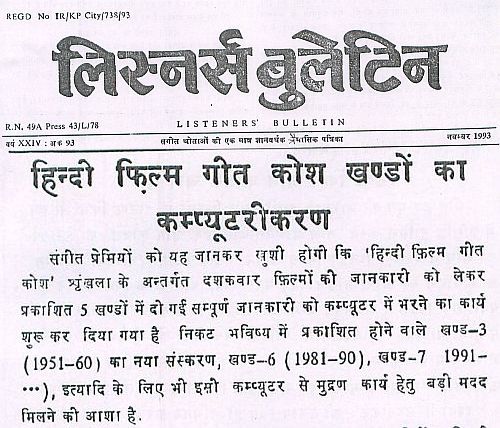 Music lovers will be happy to know that the computerization of the decade-wise complete information about Hindi films published in the five volumes has begun. It is hoped that the computerization will help in the printing and publication of the revised edition of volume 3 (1951-60), volumes 6 (1981-1990) and volume 7 (1991-….), in the near future.”

It was a tad optimistic :)

The first serious effort of data entry into a database was made in 1999. After many twists and turns, finally he and I started working on this project in earnest in April 2018. For convenience, we divided the project into three sections, Censor Certificates, Filmography and Songs.

Now less than a month later, we are pleased to announce the completion of the Filmographic Information for Volume 3 (1951-1960) for 1,160 films. The Song info for this decade is next and, if all goes well, other volumes should follow, most likely in the order Vol 4, 5, 1, 2, 6.