NEW Master Ebrahim in a recording hall with musicians. They are recording a song, or  background or title music for a film. Most likely early 50s. The photo was sent to me by Iqbal Ajmeri, his son. He has identified a few people, we would like to know if people can recognize more.

Extreme left on piano is Kersi Mistry. son of Phirozshah Mistry, music director of the first talkie. Next on the left, the person with a Hawaiian guitar on his knee is Nandram. Next, standing tall is Master Ebrahim, conducting the orchestra. Extreme right on tabla is Mangeshkar. Guy next to him on flute is Kenkre. 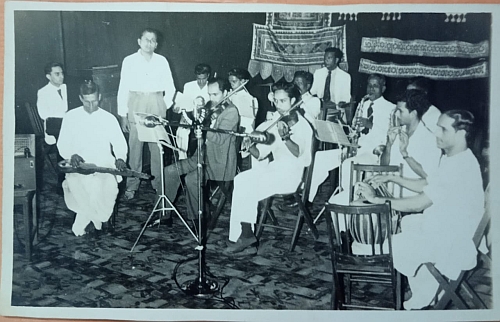 NOTE: If you are reading in non-English languages, please note that Google is translating CLARINET as SHEHNAI. Shri Ebrahim Ajmeri used to play the instrument called CLARINET. So please read CLARINET instead of SHEHNAI.

NEW: His biography has been published. 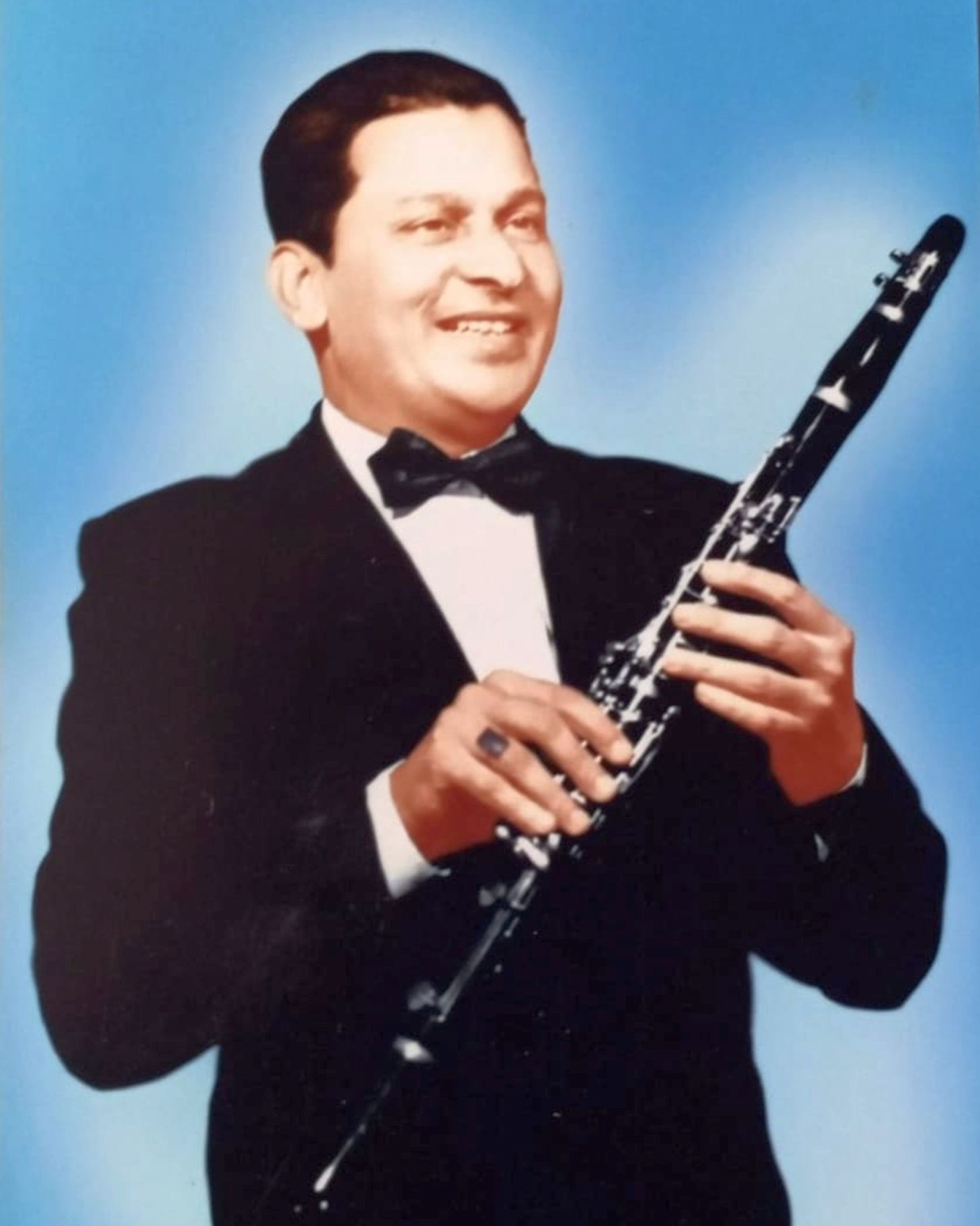 Master Ebrahim (1915-1980) was an Indian clarinetist. He was trained in Hindustani classical music. He performed ragas as a solo artist many times a month on All India Radio, Bombay from 1936 to 1974. He also gave instrumental support to many All India Radio Programs such as songs, plays, special programs in Hindi, Gujarati and Marathi. He was a staff artist at HMV (now Saregama) from 1942 onward. He played instruments for thousands of Hindi film songs with famous singers such as Lata and Rafi, and, with many composers such as Naushad and Shankar Jaikishan.

While at HMV, he also produced instrumental versions of famous Hindi film songs on the clarinet. His tunes were regularly used by Radio Ceylon (now Sri Lanka Broadcasting Corporation) in their daily programs such as Saaz Aur Awaaz. Hundreds of his recordings were issued on 78 rpms, audio cassettes, audio CDs, two EPs and one LP.

He is probably the only Indian clarinetist on whose work a doctoral dissertation was produced at an American university.

His legacy is being carried forward by his three sons, Salim Ajmeri, Farooq Ajmeri and Iqbal Ajmeri. They have continued working with all the major singers and composers providing instrumental support for their compositions, filmi and non-filmi.

He used to play classical music on clarinet on All India Radio, Bombay from 1936 to 1974. Here is a list of all the ragas. This list was provided by the AIR and he used to select ragas to play. More details will be provided in a soon to be published biography of Master Ebrahim. In the end, there is a picture of Shanti Raval who did a PhD on Master Ebrahim.